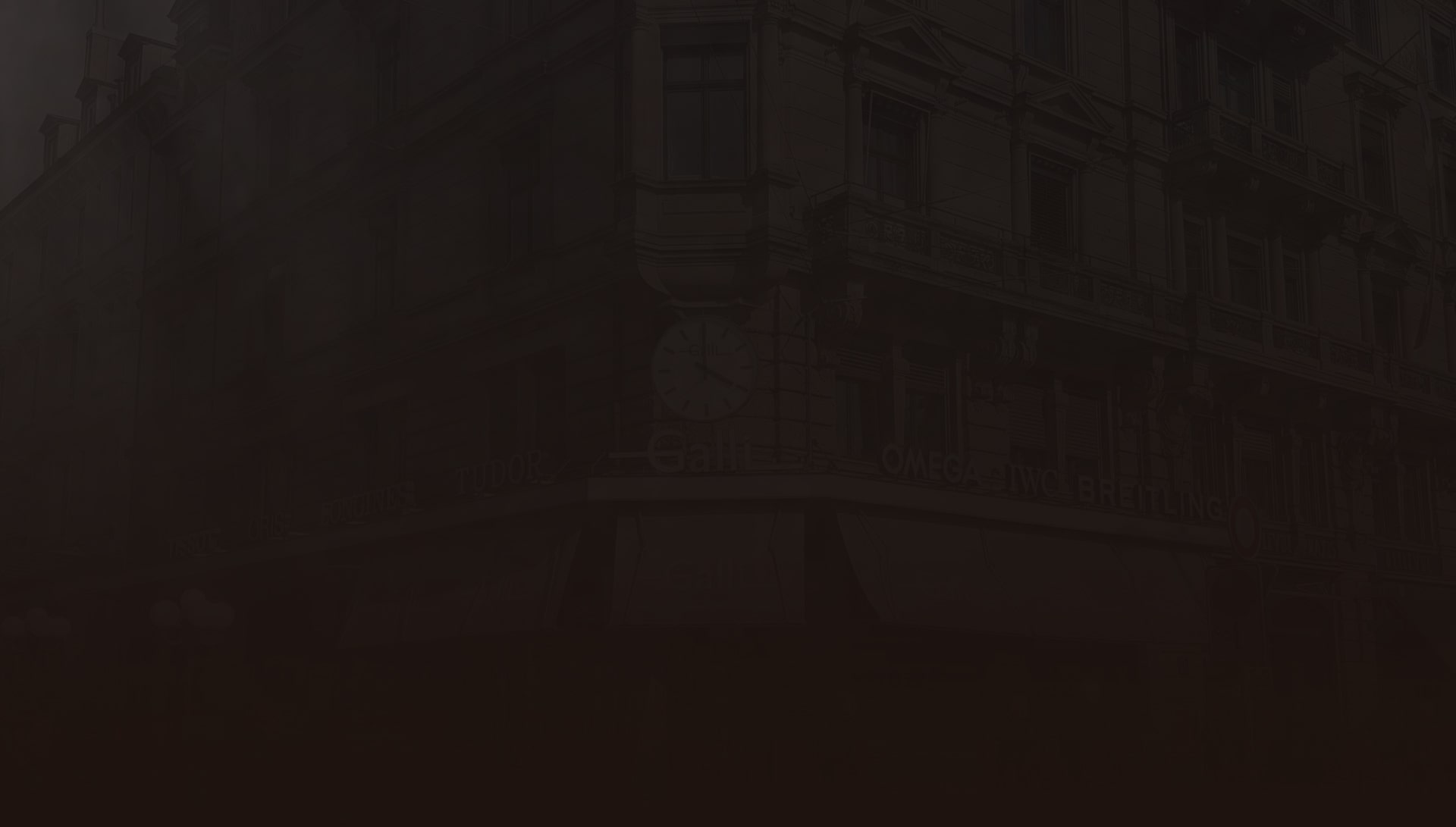 Factory visit at Omega in May 2018

In May 2018, we were honored to visit the Omega Museum and the new factory with some of our customers. We gladly would like to share some of our experiences with you. 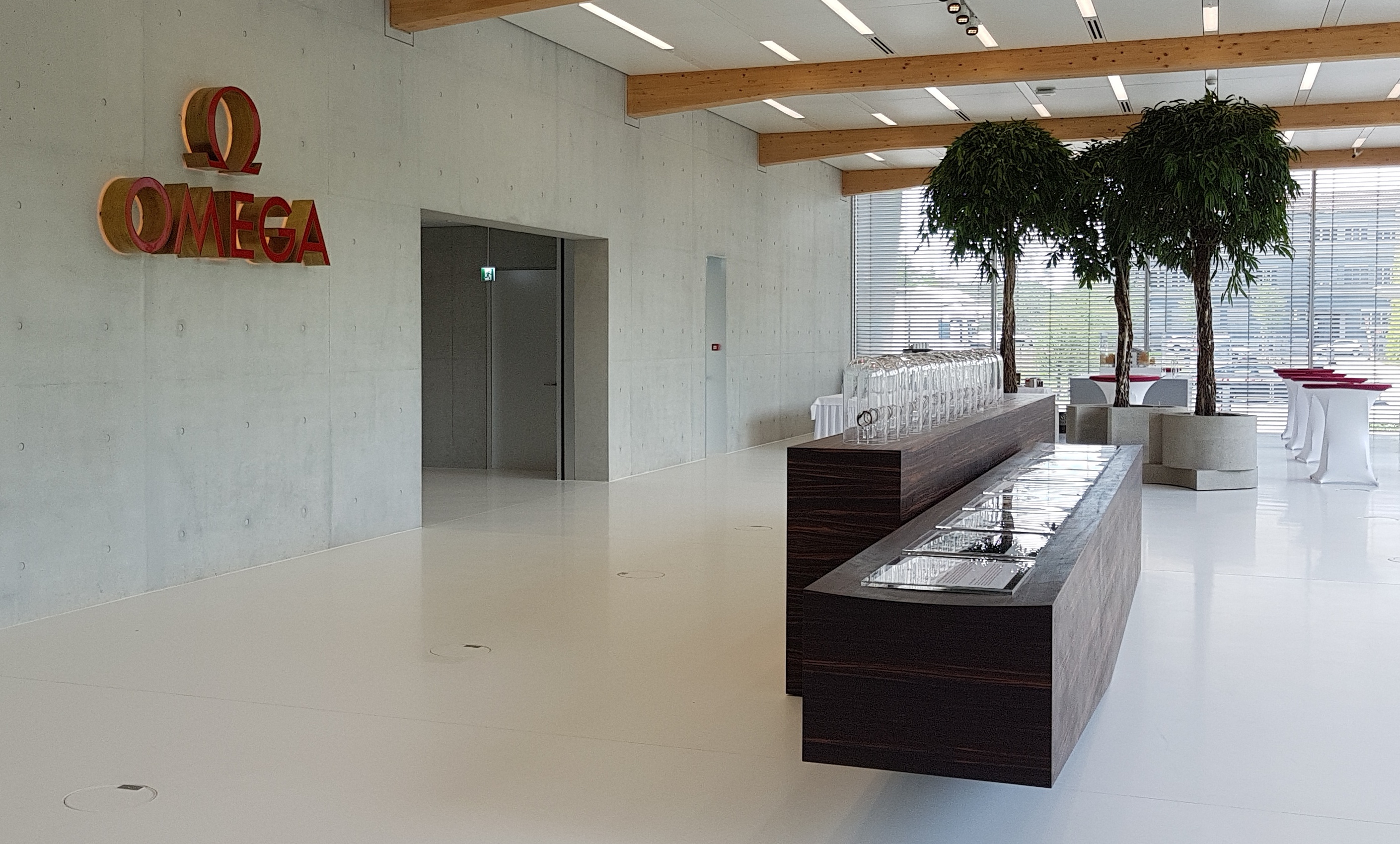 As a lover of watches, you learn something new every time you visit a factory. The impressions that the manufacturers leave are very different every time and allow various insights into the manufacturing of watches. Omega has an incredibly long history to show and had a major influence on time measur . Therefore, it is hardly surprising that they own the oldest brand museum. It is located across the street from the factory and it is obvious that they hold their origins and history in high esteem. Although the museum is in possession of several thousand models, only 200 pieces are on display. They have their own watchmaker who refurbishes and revises newly purchased models. Twice a year, he is even allowed to revise the clocks in the NASA archive, most of which are inaccessible to the public (also that of Neil Armstrong). There you can find Omega Speedmaster models, which were already in space, as well as the watch that John F. Kennedy wore during his Inaugural Address in  January 1961. What is more is that new watches are purchased every year — like the Omega of the King of Rock. For this watch, worn by Elvis Presley, they paid a whopping CHF 1.5 million francs which is the highest price ever paid for an auctioned Omega. The watch will be displayed in the museum in the future. 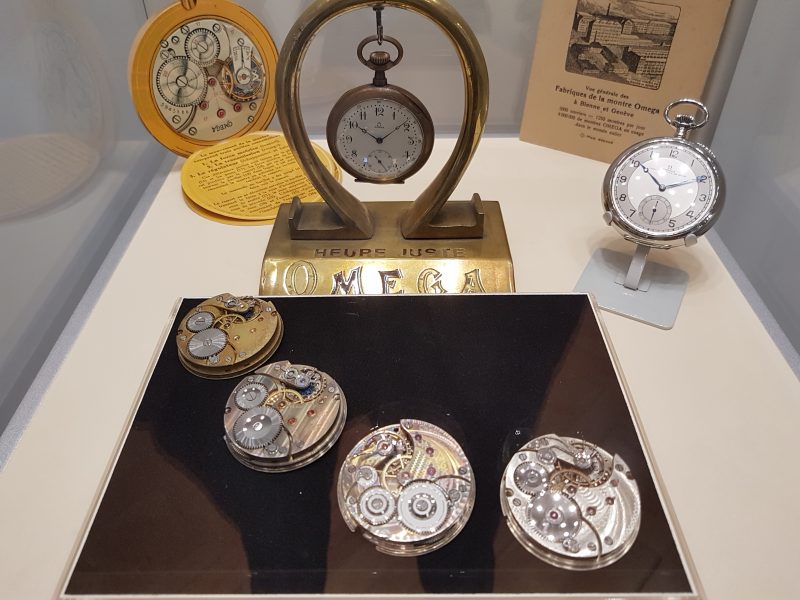 In the beginning, Omega pocket watches were available in 9 different quality categories. If you look closely at the picture, you will notice that the finissage of the movement was also different.

One of the main reasons that made Omega so successful was that defective pieces could be replaced relatively easily. Of course, at that time, reliability was also an important factor.

Of course, you will also find chronometers there that were used aboard ships (far left in the wooden box). In those days, they were used for navigating in the open sea; major discrepancies, therefore, were intolerable.

Also on display is Omega’s famous clock mechanism which still holds the precision record. It is said that it has not been touched since the prize was won. The great functionality of the clocks is backed by the accuracy data and the certificates issued at the time.

Until the beginning of the 20th century, people used pocket watches. Later on, wristwatches were introduced to the market, although the first wristwatch was worn by a lady, not a soldier. The legendary watchmaker Abraham-Louis Breguet committed to making the first wristwatch for Caroline Murat-Bonaparte in 1810. 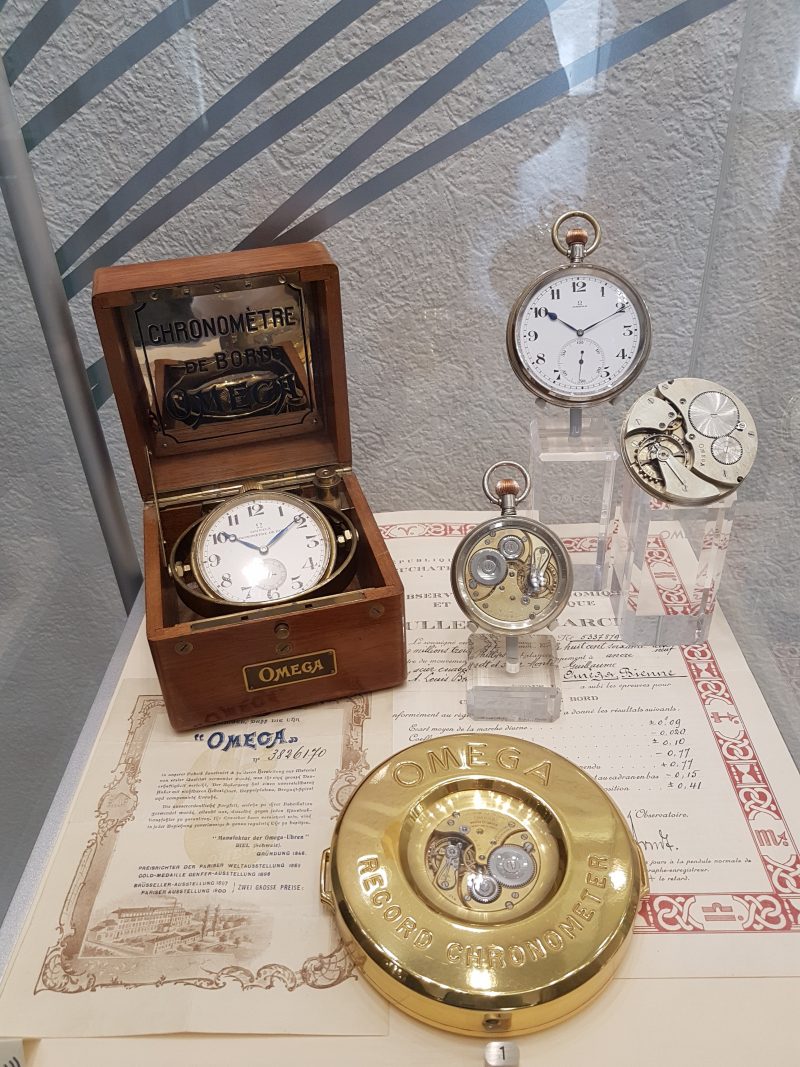 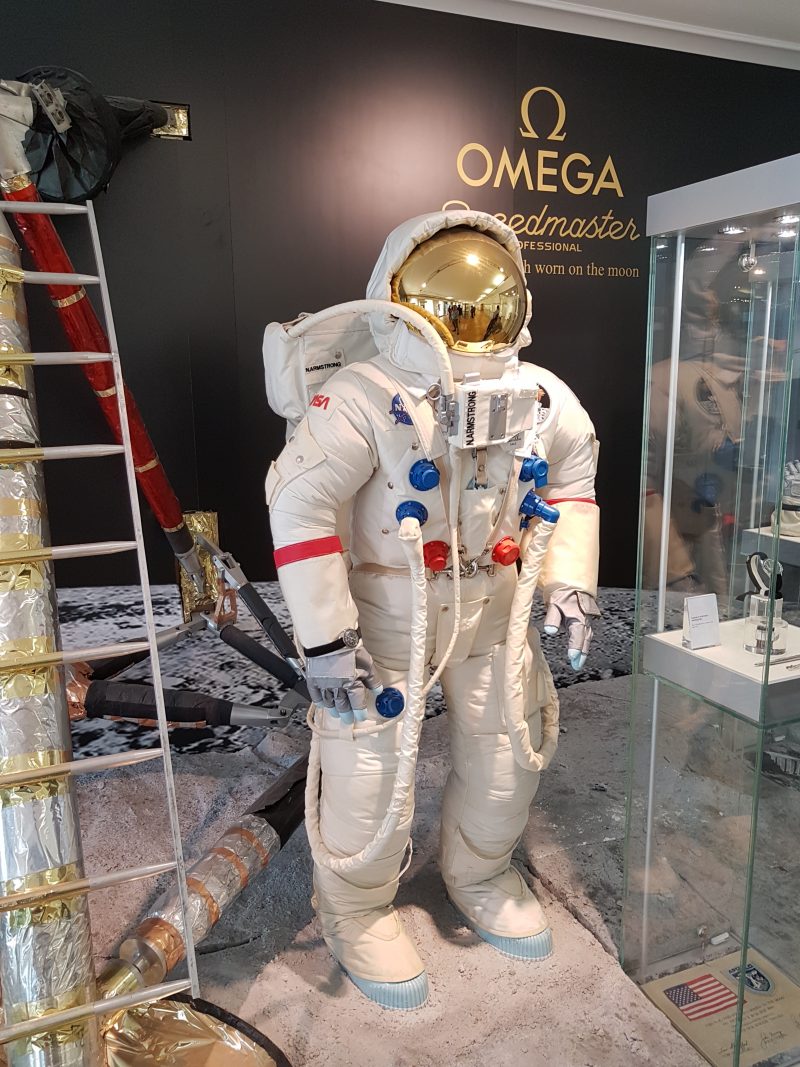 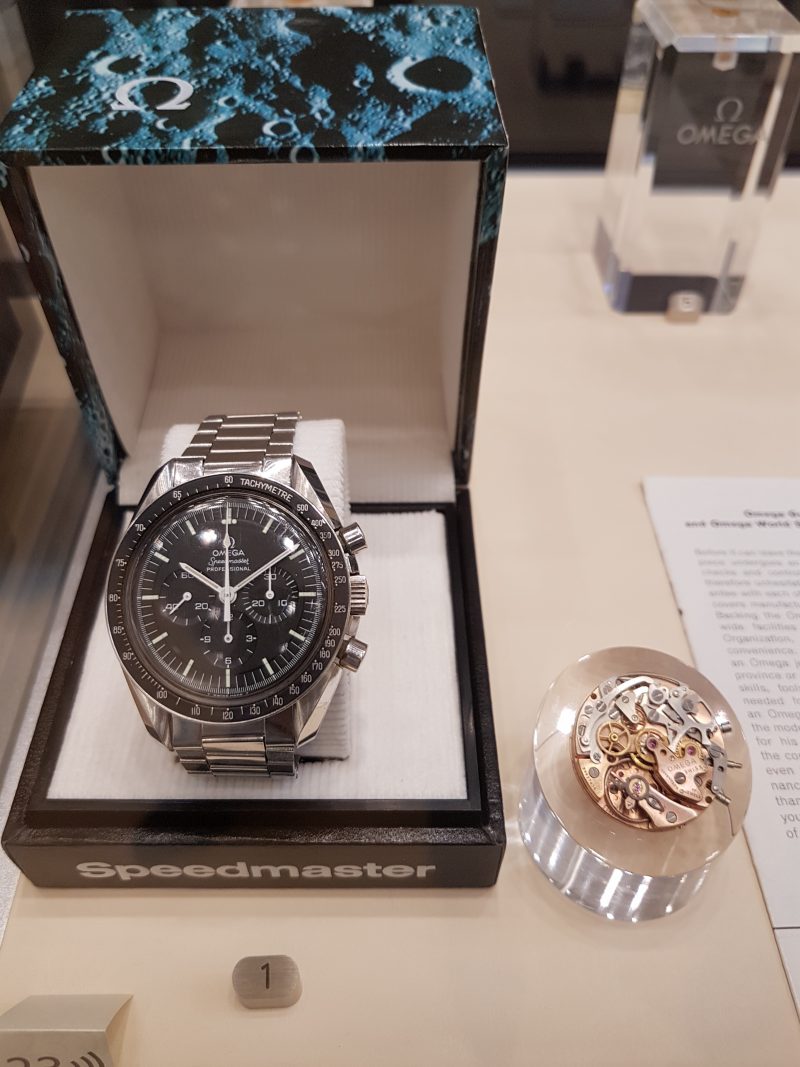 What also should be mentioned is the legendary Moonwatch which was introduced to the market in 1957 and traveled to the moon in 1969. In the museum, you will find different versions from different years. Some were even worn during NASA missions in space. Since they are still classics today, they continue to be produced:


Warning: Invalid argument supplied for foreach() in /home/customer/www/galli.ch/public_html/wp-content/themes/galli/template-parts/5-uhren.php on line 38

Warning: count(): Parameter must be an array or an object that implements Countable in /home/customer/www/galli.ch/public_html/wp-content/themes/galli/template-parts/5-uhren.php on line 50


Warning: Invalid argument supplied for foreach() in /home/customer/www/galli.ch/public_html/wp-content/themes/galli/template-parts/5-uhren.php on line 38

Warning: count(): Parameter must be an array or an object that implements Countable in /home/customer/www/galli.ch/public_html/wp-content/themes/galli/template-parts/5-uhren.php on line 50 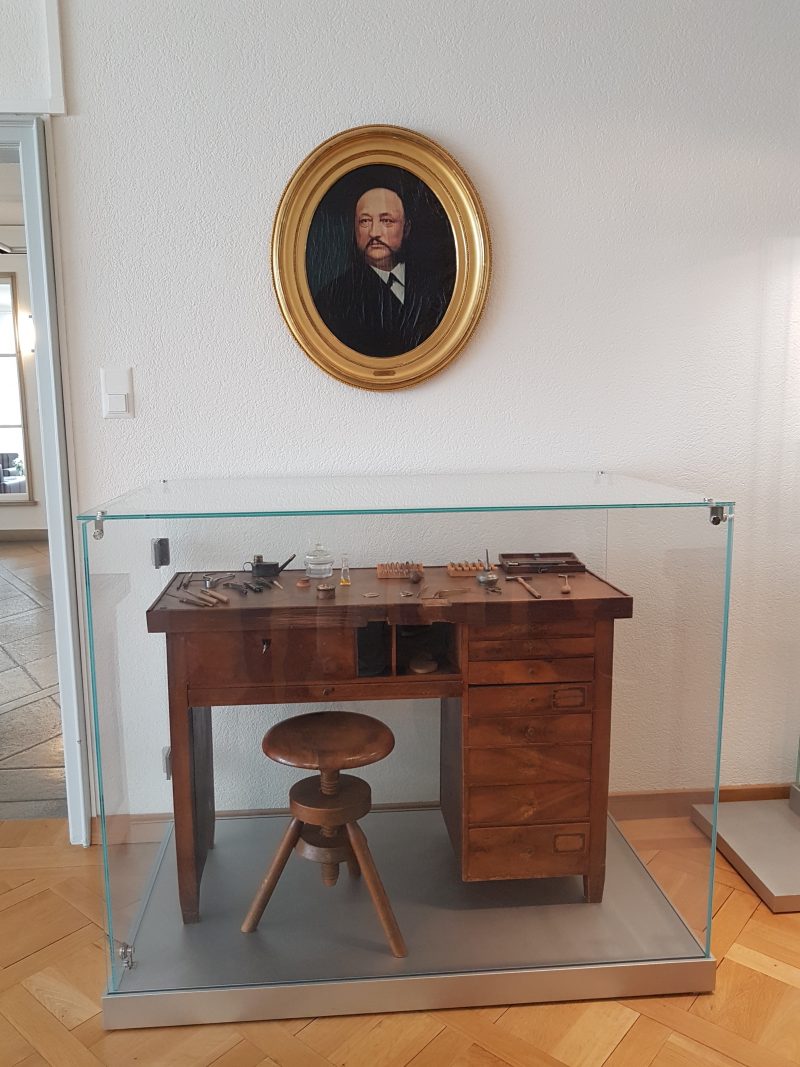 Omega was founded in 1848 by Luis Brandt. However, the name Omega was only established later in 1894, when a clock mechanism was named after it. The name Omega was chosen to emphasize the exceptional quality of this watch since Ω is the last letter in the Greek alphabet and its metaphorical meaning is “perfection”.

The picture on the left shows the workbench and some tools the founder worked with. For watch enthusiasts, the Omega Museum is a paradise and definitely worth a visit.

After lunch, we went to the factory building of Omega next to the museum. It was inaugurated in the autumn of 2017 and is therefore very modern. Photographs are allowed in the reception area but strictly forbidden in the “assemblage”. These are some impressions: 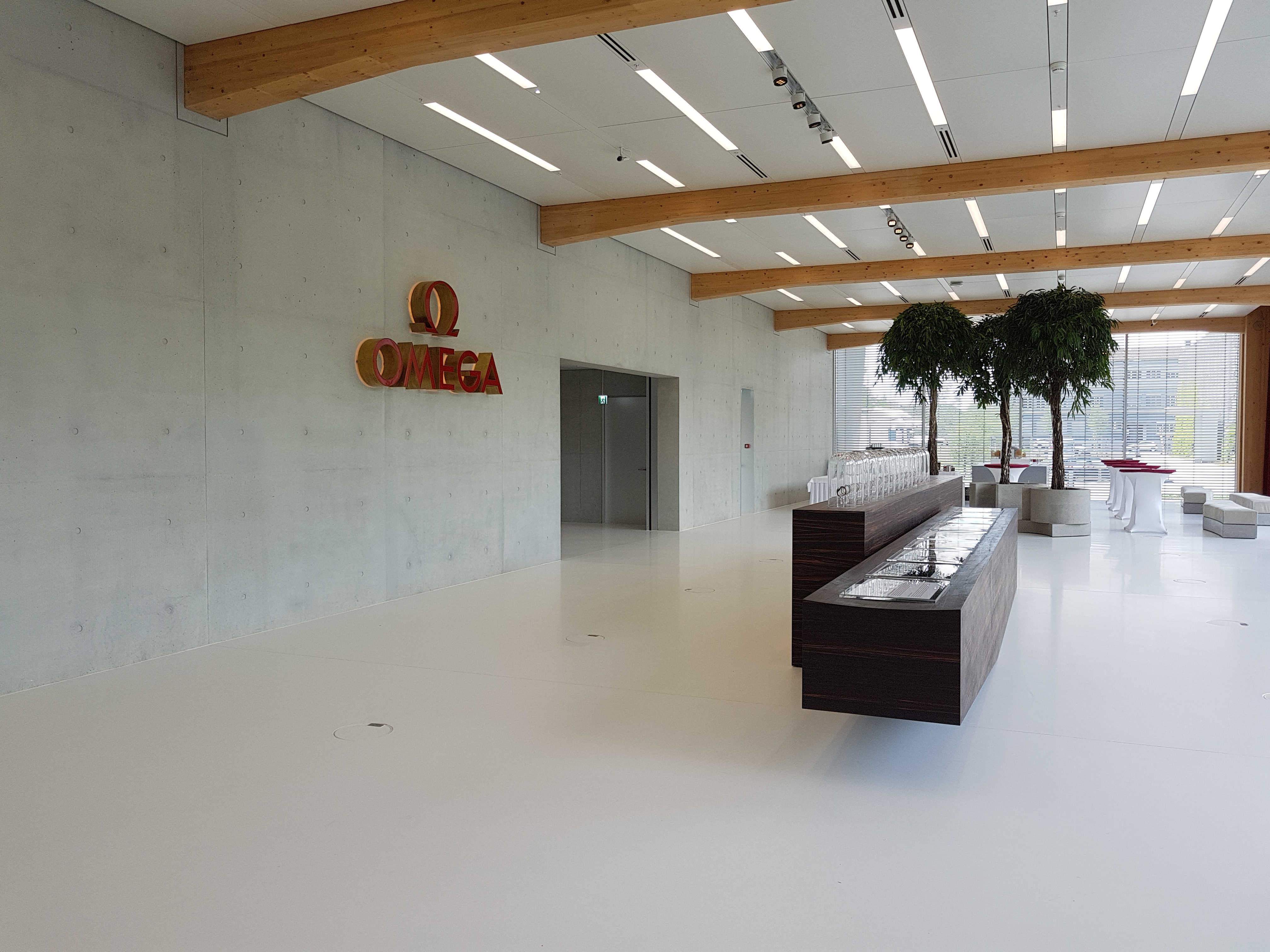 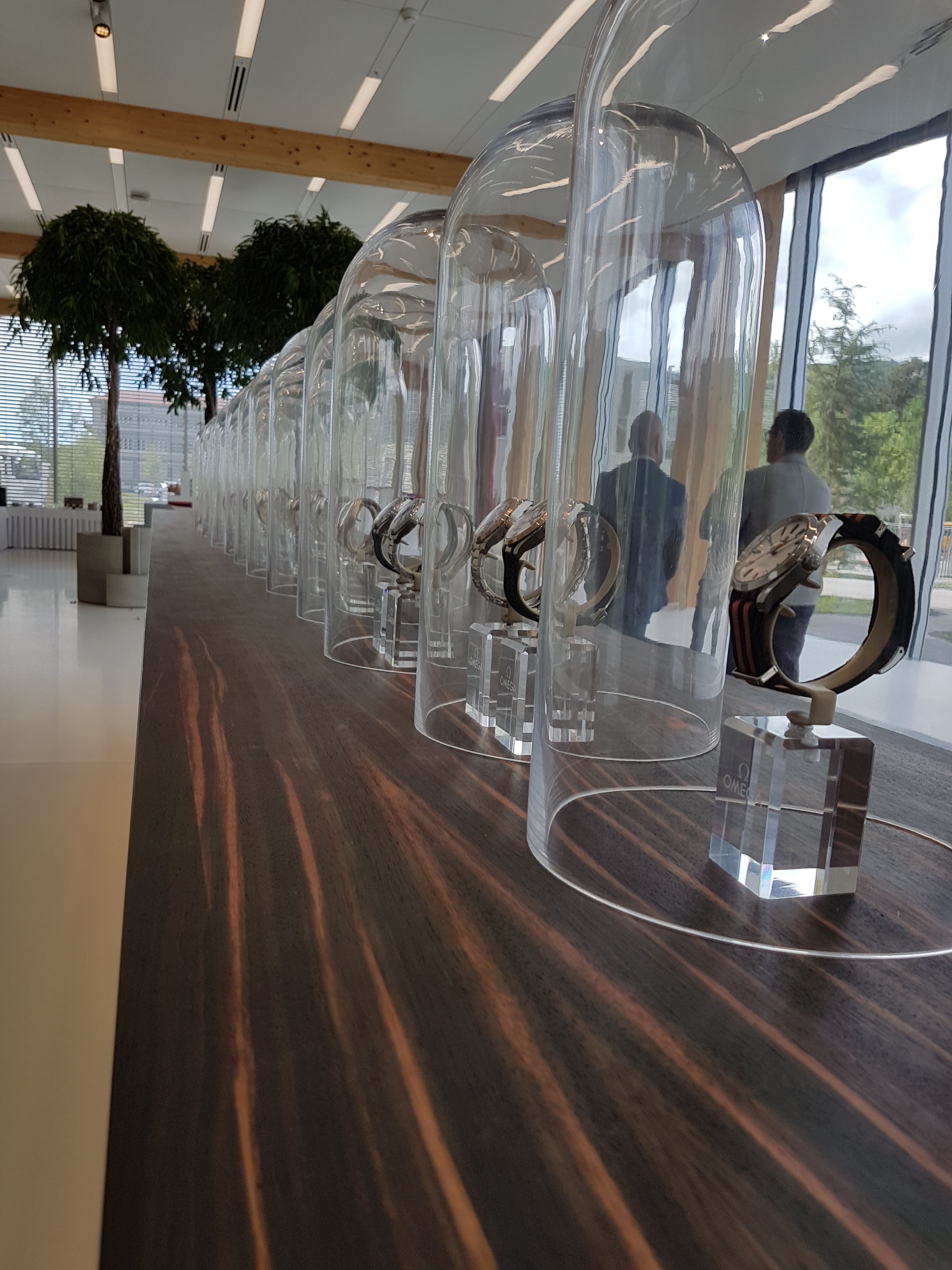 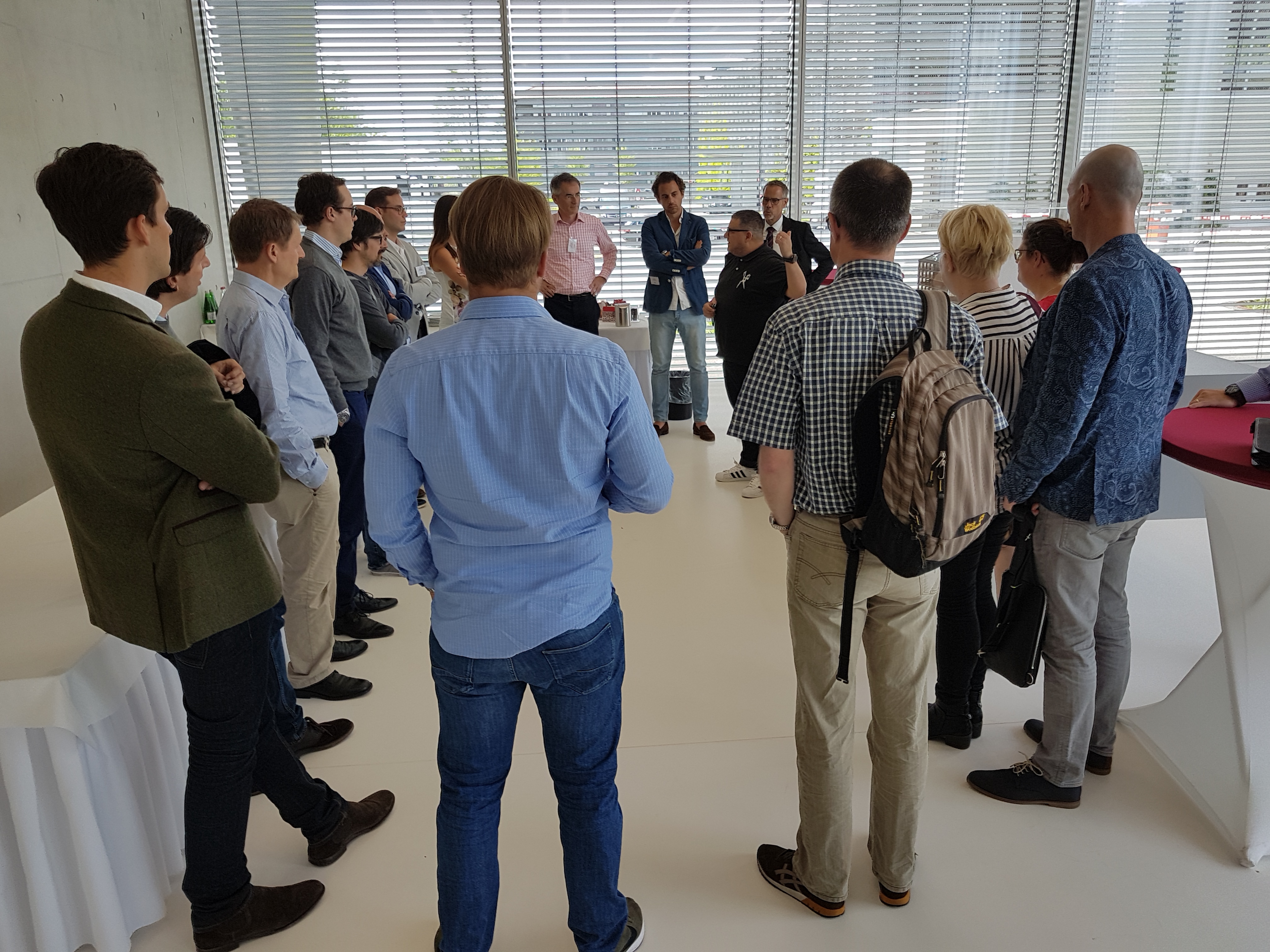 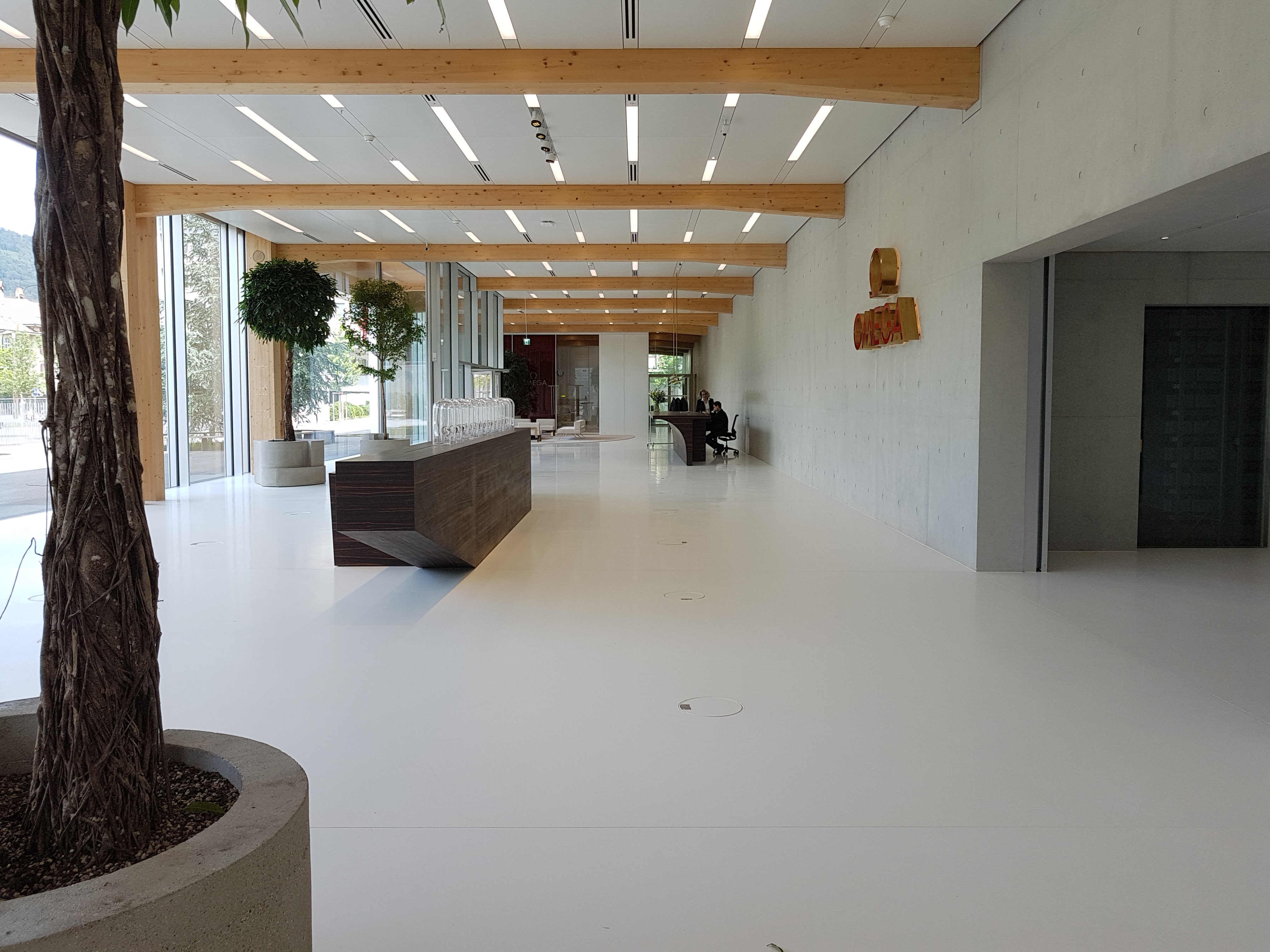 We would like to express our sincere thankfulness to Omega for the exciting tour of their factory. Our clients were able to gain deep insights into the history and philosophy of the traditional brand. Despite all the technological advances mechanical clocks are still assembled with the human hand. 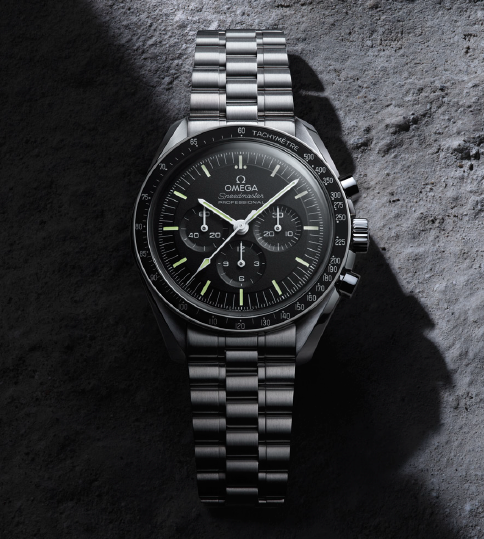 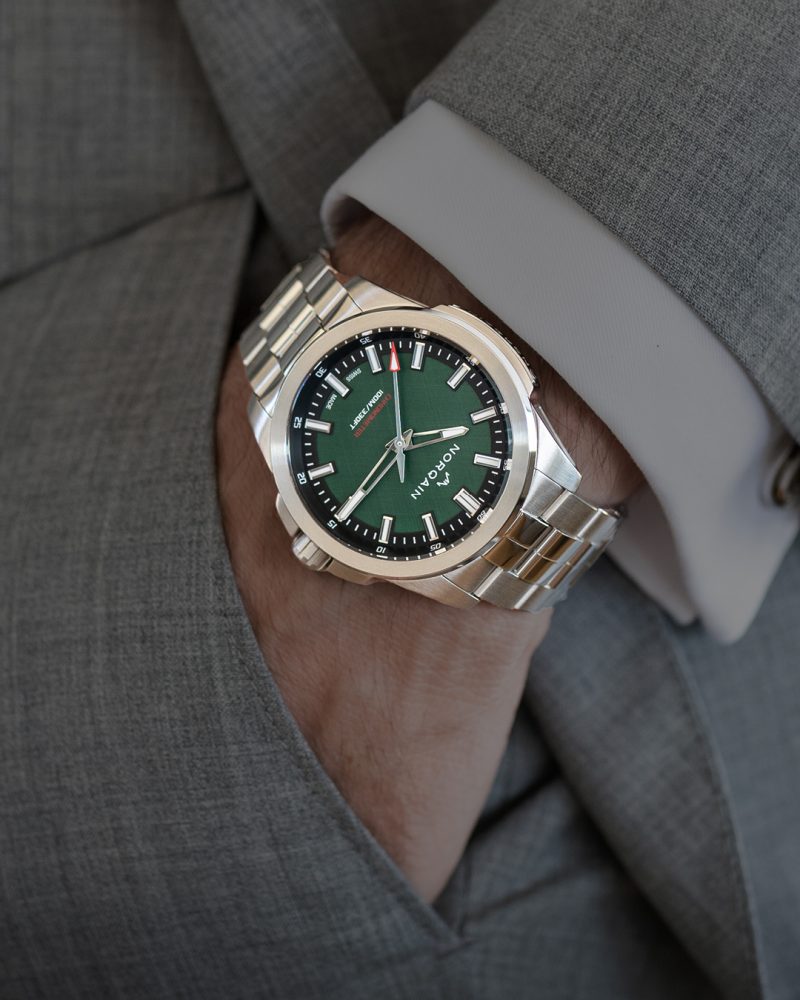 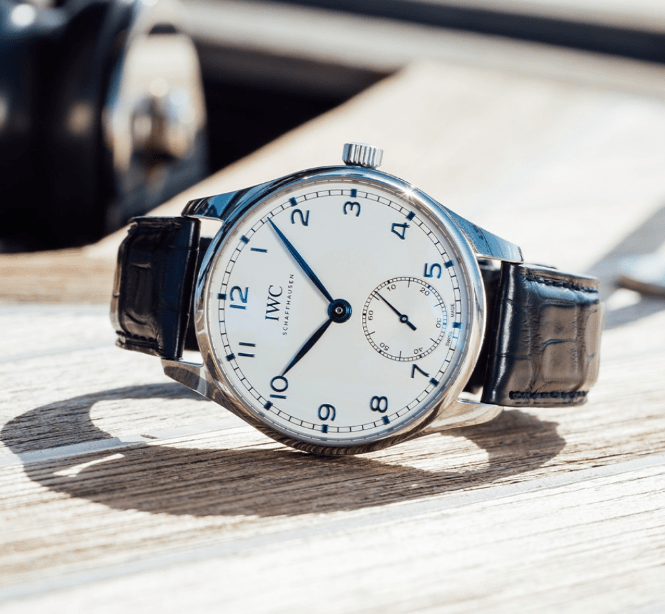 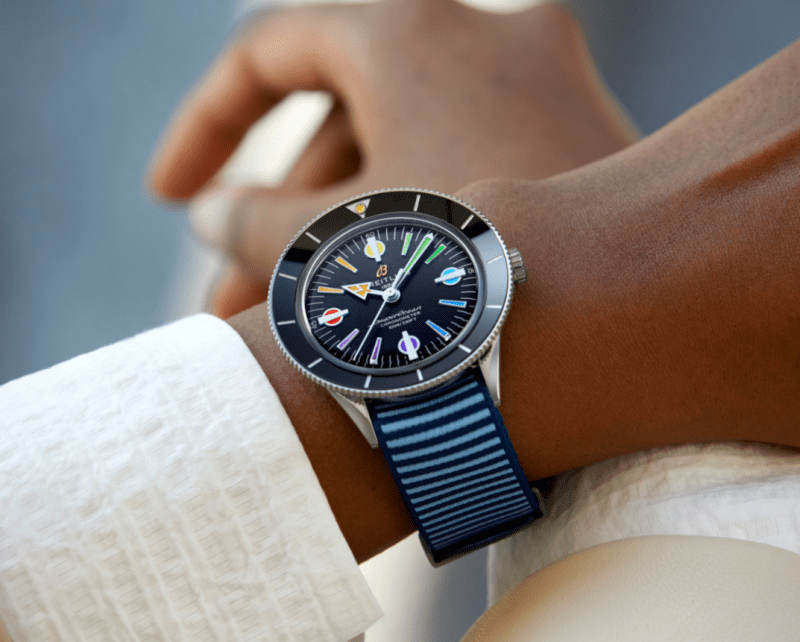